Chris Drury was one of the most sought after executives in the NHL. Former Rangers GM, Jeff Gorton was a guest on the Cam and Strick Podcast and spoke about his one time assistant.

“I knew he’d be a GM. [Drury] had a ton of teams calling for him – asking for permission to talk to him, and rightly so,” Gorton said. “He’s a hard worker, he’s played, he’s won, he’s dialed in and focused on what he wants . He’s gonna be good.”

Gorton noted that he and Drury had a good relationship that started to build when he was an assistant to then GM Glen Sather. When Gorton got promoted to the GM position, he hired Drury as his assistant.

Host Andy Strickland joked with Gorton if it was uncomfortable having Drury work under him, because everyone assumed he would eventually be a GM and could replace him.

“I used to say that to him once and awhile, one day I’ll be gone and you’ll be here,” Gorton quipped back. “I might have not predicted when, but that’s life and I understood that. Chris is a bright guy.”

The Rangers promoted Drury at the same time they dismissed John Davidson and Jeff Gorton. “Chris is a very sought-after executive and a strong leader, who has proven himself to be one of the top young minds in hockey,” owner James Dolan said. “We are confident he will effectively guide the team to ensure the long-term success we promised Rangers fans.”

This is Drury’s 7th season with the Blueshirts front office, his first as President and GM.

Full interview can be heard here. 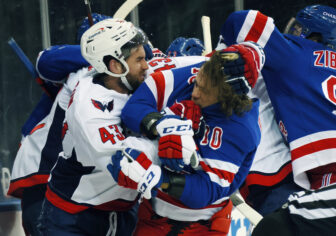 Rod Gilbert continues to be honored

Legendary New York Rangers player and icon Rod Gilbert passed away at the age of 80 on Sunday. His trademark number 7 was retired on October 14, 1979 and will forever stand as a testament to one of the greatest Blueshirts in franchise history.

In the days since, the outpouring of love from players, media, and fans for Mr. Ranger have been tremendous. The respect for Gilbert continued last night with the NY Mets paying tribute, as well as the marquee in front of MSG.

The Central saw a lot of changes via trade and free agency this summer, but can anyone take out the Avs? Read more.