Panarin missed the last game, a 3-2 shootout loss to the Vegas Golden Knights on Friday, due to a lower-body injury. It was the first game Panarin has missed this season. The 30 year-old leads the Rangers with 33 points (nine goals, 24 assists).

Panarin and Shesterkin ready to go

Both Panarin and Igor Shesterkin were full participants in practice and would’ve started in Wednesday’s game against the Montreal Canadiens that has been postponed by the NHL.

Shesterkin is 13-3-2 with a .937 SV% and a 2.05 GAA on the season, and has not played since being helped off the ice against the San Jose Sharks on December 3rd. The 25 year-old netminder was dealing with a lower-body injury that put him on IR.

If the NHL does opt-out of the Olympics as is expected, that would remove Team USA’s head coach Mike Sullivan unable to participate. The coach of the Penguins did select former Rangers bench boss David Quinn as his assistant, and Chris Peters believes he would take over for Sullivan.

Recently, Team USA announced Bill Guerin as their GM and Chris Drury as his assistant. The credentials and ties are certainly there for Quinn to assume the role. 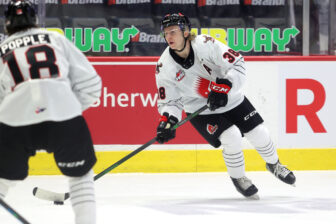