The Rangers opted to not bring back Brendan Smith for next season. He signed yesterday with the Carolina Hurricanes for 1-year at $800,000.

He was popular among his teammates and stood up to Tom Wilson in the aftermath of him running roughshod over the team. While his career in NY was up and down, he made his feelings known before heading out.

One of the happiest moments of my life is when I put on the New York Rangers Jersey for the first time! One of the most sad moments of my career is knowing I’m taking it off. It was truly an honor to be a Ranger and play infront of some of the best fans in the world and arguably the greatest arena ever. I will cherish my tenure with the NYR forever. Thank you

The New York Rangers may be the only team in on Jack Eichel. It’s hard to blame Chris Drury to bid against himself. According to Larry Brooks of the NY Post, he’s hearing the Rangers original package has changed, partially due to the Sabres need for a starting goalie.

There is a strong sense that Chytil would necessarily be included in a package going the other way in a hypothetical deal for Eichel, because the Sabres need a center in return and all that. But one individual with some knowledge of the proceedings told The Post on Thursday that the latest entreaty includes Vitali Kravtsov, Zac Jones, Alexandar Georgiev and a first-rounder, but not Chytil.

When the Rangers signed Filip Chytil to a bridge deal worth $2.3 million for two seasons it was thought he’d be included in any Eichel trade. Obviously a player under contract is better than trading for his rights.

Chris Drury is likely willing to move either Chris Kreider or Alexis Lafreniere to the right wing, but after trading Pavel Buchnevich he’d likely want to keep Vitali Kravtsov to take his spot. If he can swap out Kravtsov with Chytil it would be an excellent move. 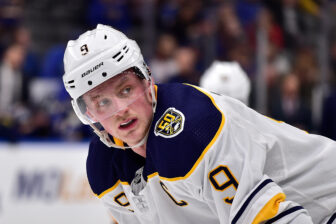 Also Read:
NHL: Sabres make it clear to everyone, they are in “control of the process”

According to the Ottawa Sun, the Senators are still very much interested in trading for Ryan Strome.

The Senators may also try to find another top-end winger  that can do the job that Dadonov wasn’t able to do here. They’re still in the mix for New York Rangers’ centre Ryan Strome, who may be dealt if they make a trade for Buffalo Sabres captain Jack Eichel.

If the Rangers make a deal for Eichel that does not have Strome going the other way, look for a move to Ottawa to clear cap space.