Vladimir Tarasenko wants out of St. Louis and the Blues are happy to accommodate his request. The 29 year-old has two years left on a deal that comes with a $7.5 million AAV and the ability to control his fate. Thanks to his contract which includes a 10 team trade list protection.

In a new report from Jeremy Rutherford of The Athletic, he notes the New York Rangers as one of the team’s Tarasenko will accept a trade to.

Tarasenko has given the Blues a list of at least 10 clubs to which he can be traded, and we think we know a majority of those: the Rangers, Islanders, Golden Knights, Bruins and Flyers we reported previously, and you can add the Lightning, Capitals and Panthers to that list.

Rutherford also speculates that the Rangers would likely want to send Chris Kreider back the other way. Problem with that is Kreider has a FULL no-move clause that becomes modified in 2024. Kreider completely controls if he gets traded at all.

At this time, there is no reason to believe that the Rangers have any interest in Tarasenko. They are overloaded at right wing, and are looking for a top center and bottom six players. 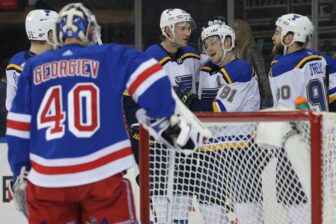 Also Read:
Vladimir Tarasenko and the New York Rangers connection; is there a trade to be made

When trying to discern where Tarasenko will land, two key factors need to be considered. One; is the team a contender and two; what’s that team’s cap situation.

Here are three potential ideal landing spots for Tarasenko, but it will require money going back out in order for the deal to work.