Rod Brind’Amour and his Carolina Hurricanes were eliminated in 5 games by the Tampa Bay Lightning last night. His contract is now up, and he is a free agent for all teams to pursue. The Rangers had to wait and see if Brind’Amour would become available before making any final decision on a head coach.

So now it’s time to put their efforts into overdrive.

Why is Rod Brind’Amour so sought after

The 50 year-old Brind’Amour is lauded as being the next great coach because he’s mastered communication with today’s modern hockey player. In his three seasons leading the Canes, his record is an astounding 120-65-20. That’s good for a .634 winning percentage.

So why has he become such a quick success? The Canes are not a perfect hockey team. They have some really good players, but no superstars aside from Sebastian Aho. However, Brind’Amour still gets the most out of the group and keeps a strong positive vibe in the room.

Elliotte Friedman said on Sportsnet’s Headlines, “We’re all expecting Rod Brind’Amour to go back to Carolina – it’s not done yet.” There’s a supposed three-year deal on the table he has yet to sign. “If that goes sideways at all, I would think the Rangers would want to at least ask if he’d be interested,” Friedman concluded.

The Rangers may be looking at Gerard Gallant as their next head coach, but they likely won’t make that choice until they fully understand the landscape of all available coaches. Now here we are, and I expect the Rangers and Brind’Amour to meet.

Rod Brind’Amour could be a red herring

By definition, a “red herring” is a literary device for a misleading clue. The pursuit of Brind’Amour may be exactly that for the New York Rangers. That’s why I would proceed with caution if I am Chris Drury.

The Rangers coaching job is one of the most high profile in all of hockey. So by default, many (especially in NY) believe it’s where everyone wants to go. I don’t think that’s the case with Brind’Amour. He loves his Canes, and his locker-room speeches talking of family seems heartfelt and real. For me, it’s where he wants to be.

Here’s what been reported, the Hurricanes have had a three year extension on the table worth around $1.8 million per season since April. Their owner Tom Dundon is on record saying, “I’ve never really had a problem keeping good people, if I want to keep them, we keep them, we’ll find a way and he’s the best.” He then doubled down by adding, “I have no interest in owning the team without him coaching it, so he’s going to coach it.”

What I believe is likely to happen over the next week or two is tactical. Brind’Amour will certainly talk with the Rangers who would easily offer double that. Then he will go back to Carolina to up their offer and stay with them. 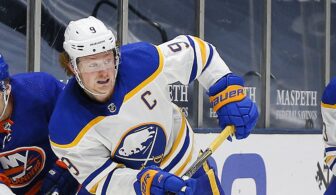 If there is a place Brind’Amour could leave Carolina for it is Seattle not New York. That’s because Ron Francis is there and likely has already asked for permission to speak with him.

The two are very familiar as teammates and also on the management level while together in Carolina. Before Francis resigned as the GM, Rod Brind’Amour was an assistant coach under him with the Canes. Francis eventually had his contract terminated by Carolina when Tom Dundon became the new majority owner.

The Seattle Kraken have made it a point not to rush a coaching hire saying they would go all the way up to June 30th if they need to. It’s not like there aren’t excellent coaching candidates available in Gerard Gallant whom he’s interviewed. So who was Ron wanting for? It doesn’t take a rocket scientist to figure this one out.

Aside from the Rangers job, the Kraken opportunity is also going to be very high profile. Anyone who watched Vegas come into the NHL can see that. Plus here’s another factor – it has a lot less volatility associated with it. If you think that executives and coaches around the league look at what happened with John Davidson and Jeff Gorton see stability, you’re kidding yourself.

James Dolan is once again a factor with the Rangers and he has a history of being reactionary. Brind’Amour could be fired within two months of being hired if the Blueshirts got off to a 10-20 start. That’s not lost on anyone, especially him. Brind’Amour knows that he just supplanted Gallant as the top coaching candidate available last night. So he holds destiny completely in his hands.

That’s why I urge Drury to take heed. He may very well be chasing a red herring, and while doing so could lose Gallant to a team like the Blue Jackets.

Update: Pierre LeBrun is noting that signing Rod Brind’Amour and his assistants are a top priority for Carolina. Brind’Amour has been adamant about his assistant be taken care of as well. All this further reinforces my story above.