Vitali Kravtsov will be a healthy scratch for the second consecutive game. Per Newsday’s Colin Stephenson, New York Rangers head coach Gerard Gallant said there’ll be no lineup changes versus the Avalanche tonight.

This will be at least the eighth healthy scratch for the 2018 first round draft pick this season. Kravtsov has only played in 10 of the team’s 29 games to date.

“[Kravtsov’s] a young player and no different than the other young players we have,” Gallant said on Thursday. “I like (Barclay) Goodrow up there and he’s played great hockey for us all year long. He’s a competitive guy and you see what he does for us every night. Nothing against Kravvy, I just like the lineup the way it is right now.”

The current situation for Kravtsov and his agent isn’t ideal after he signed a one-year show me deal this past summer.

This was always going to be an uphill battle for the talented forward after he requested a trade before the start of last season and went to go play in the KHL instead of reporting to the Hartford Wolf Pack.

By all accounts, Kravtsov’s done everything the Rangers have asked beginning with him arriving in August to prepare for camp. Some bad luck injuries have impeded his progress but it’s hard to develop or build trade value from the press box.

At this point, Kravtsov is the team’s 13th forward with very little chance of cracking the lineup unless there’s an injury.

Jonny Brodzinski, who was called up from the Wolf Pack last week is now the Rangers fourth line center. In order to make room and accrue cap space, Ryan Carpenter was waived and now being assigned to the AHL.

Simply not a good situation

There was some chatter by the NY Post’s Larry Brooks reporting that the two sides were discussing a conditioning stint in the AHL prior to him dressing against the Ottawa Senators on November 30.

It obviously didn’t happen and one has to wonder if Kravtsov and his agent Dan Milstein would’ve agreed to it. After signing a one-year, one-way contract this past summer, Kravtsov must consent to the conditioning stint which can’t exceed 14 days per the CBA (13.8).

So where do the Rangers and Kravtsov go from here?

Obviously a trade is clearly on the table and has been since last year. However, per a knowledgeable source, Kravtsov’s value is no higher than a second-round pick, possibly no more than a third.

Knowing how patient GM Chris Drury can be, with a reputation of being a shrewd negotiator, there’s always a chance that no deal is made at the deadline.

Which will bring the Rangers into an unenviable position of tying to trade the rights of a restricted free agent who will unlikely want to resign. 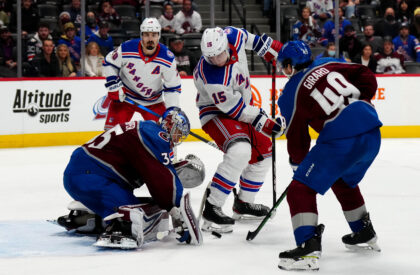