The New York Rangers have won two in a row and hope to add another win to keep this little streak alive.

On Friday night in Denver, they will face a struggling Colorado Avalanche team that has lost three straight games. To make matters worse for the defending Stanley Cup Champions, they’re battling significant injuries as 10 regulars are out of the lineup.

It’s an obvious trap game if the Blueshirts take their opponent lightly. However, to a man they seem to understand the urgency of their situation.

“We’ve had a stretch where we were in a rut,” Vincent Trocheck said on Thursday. “Every point matters right now and we’re fighting to get into a playoff spot.”

The Blueshirts responded to Monday’s third period comeback win at home against the St. Louis Blues with a thorough walloping of the Golden Knights in Vegas on Wednesday. With two big victories guiding their sails, they hope to keep the ship going in the right direction against last year’s champions.

Igor Shesterkin, who won both contest is expected to get the start in goal tonight. Despite the Rangers struggles this season, the 26 year-old reigning Vezina winner has been solid with a 12-4-4 record, a 2.58 GAA, and a .913 save percentage.

On Thursday, the Rangers placed center Ryan Carpenter on waivers opting to roll with Jonny Brodzinski as the new fourth line center. The 29 year-old is a +1 in two games with no points, but he’s connected well with Sammy Blais and Julien Gauthier.

“[Brodzinski] just plays solid hockey,” Gerard Gallant said. “That line was really good last night and even the game before. They’re getting the trust of the coaches.”

Of course, that just one of the line tweaks Gallant made to spark the team against the Blues. The new top line of Mika Zibanejad with Alexis Lafreniere and Kaapo Kakko is showing real promise.

Since the trio was united during the second period against the Blues, Lafreniere has two goals (both assisted by Zibanejad) and an assist while Kakko scored the opening goal in Vegas. Just as important, all their points come 5v5 and both players are a +4 in the last five periods together. 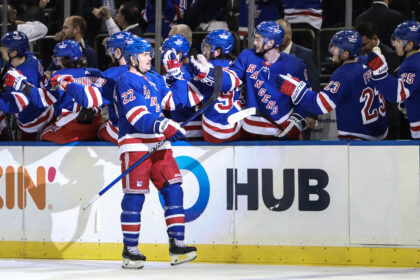 The Avalanche are really dealing with a ton of injuries this season but remain a dangerous team.

Coming into battle tonight, Nathan MacKinnon is out 4-5 weeks with an upper-body injury. Captain Gabriel Landeskog is another prominent player out of the lineup as he recovers from a surgical procedure. Things are no better on defense with both Josh Manson and Bowen Byram on injured reserve.

On Thursday, Avs coach Jared Bednar indicated that either Valeri Nichuskin or Darren Helm could return against the Rangers. Another possibility is forward Arturri Lehkonen, who is day-to-day with an undisclosed issue.

Bottom line, the team still has Cale Makar and Mikko Rantanen healthy and playing. That means keeping the pedal to the metal and another full 60 minute effort for the Blueshirts. 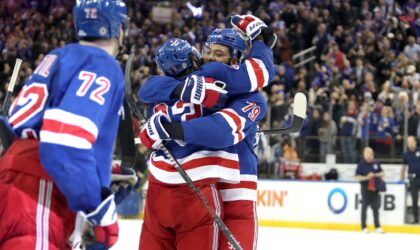