Vitali Kravtsov may get one more chance to crack Rangers lineup

It took three straight losses, with two of them being absolutely abysmal, but Vitali Kravtsov appears to be getting one more shot in the New York Rangers lineup.

The 22 year-old has been scratched for eight straight games and there’s been chatter that he was heading to the AHL for a conditioning stint. That was supposed to happen before the team headed out to face the Senators in Ottawa on Wednesday, but based on today’s practice Kravtsov looks like he’ll play the next game.

According to USA Today’s Vince Mercogliano, Kravtsov was on the right wing with Alexis Lafreniere and Ryan Carpenter on the third line. Vincent Trocheck was given a maintenance day and is expected to slot at center, which should mean a scratch for Carpenter.

Vitali Kravtsov getting another chance

Kravtsov has been biding his time and putting in the work ever since a tooth infection took him out of the lineup after an 8-2 win over the Detroit Red Wings on November 10.

“My teammates, the trainers, the coaches are all working hard to get me bigger and more ready,” Kravtsov told the NY Post on Sunday.

Of course, the question to ask is why has it taken this long to get him back in the lineup? Head coach Gerard Gallant stated clearly that he had no issue with the kid but he likes other players better.

That’s hard to understand considering the Rangers have gone 3-4-1 in his absence.

Players that Gallant is likely referring to that are blocking Kravtsov would be Sammy Blais and Ryan Carpenter. Neither of which has done much to warrant keeping the 9th overall pick from 2018 out for weeks.

“Like I said to [Kravtsov] earlier, ‘Show us your skill, show us your work ethic. Just saw us your game,'” he said after practice.

One of the biggest issues for the Rangers this season has been their defense.

Far too often all of them at one time or another are coughing up pucks. The pairing of Jacob Trouba and K’Andre Miller have been at the forefront of those issues and are likely to be broken up for the next game.

“Anytime you lose you want to come back more focused,” Miller said via the team’s YouTube channel. “Make sure you’re crisp with your passes being on the tape, shots hitting the net, and little things like that. Last couple of games we haven’t played too bad…but there are things we need to bring for a full 60 minute effort.”

Ryan Lindgren and Adam Fox have also had their issues, but some of that could be attributed to the fact Fox is playing a lot of minutes, including 30:04 in the loss to the Devils last night.

Another issue has been the revolving door on left defense for Braden Schneider. Neither Zac Jones or Libor Hajek are benefiting from being sat for long stretches and then being thrusted back in.

Practice rushes today indicate that Trouba is likely going to play with Jones and Miller with Schneider for Wednesday’s contest.

“If we decide to do that it’ll be become we want more depth to our pairs,” Gallant explained. “It’s been a tough go but [Trouba and Miller] are a great pair.” 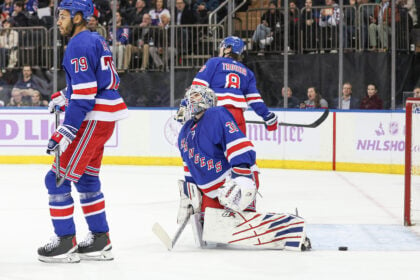 Also Read:
Igor Shesterkin ‘ashamed’ of his play but Rangers have plenty of blame to go around