The disgruntled former first round draft pick is currently sitting in Russia waiting for the KHL season to resume on March 1st. Earlier this month, the KHL announced an abrupt end to their regular season due to COVID-19.

The league is currently on hold until the conclusion of the Olympics.

In their latest update released on February 11, Kravtsov has dropped dramatically to #21. Here’s a quick glance at the new top 10.

Kravtsov tells teams he is willing to report if traded

He was selected by the Rangers in the 2018 Draft, 9th overall. His situation and fallout with the organization is well documented. What remains abundantly clear is that GM Chris Drury will not rush a trade, but he is expected to be moved at the NHL Trade Deadline.

Apparently, his stock has dropped because there’s been some concern among acquiring teams if he would actually play in North America.

“I’ve been told [Kravtsov] has been telling teams he plans on coming back to North America,” Elliotte Friedman said. “The other thing too is that he’s going to have to go on waivers. So it’s not like (the acquiring) team is going to send him down to the minors. They’re going to give him a shot to play.”

What is also interesting in what Friedman had to say, is what he didn’t say. That is Kravtsov coming back to play for the Rangers. If you recall, both sides put out public relations statements indicating they were open to continuing a relationship, but even at that time we said it was unlikely.

Kravtsov was recently mentioned as part of a trade package for Arizona Coyotes defenseman Jakob Chychrun. That lends some credence that Kravtsov could be made part of a larger deal.

He’s also rumored to be involved for a potential trade for Vancouver’s J.T. Miller and possibly Vegas’ Reilly Smith.

Should the Rangers not trade Kravtsov by the deadline, then the Draft this summer makes the most sense to move him. 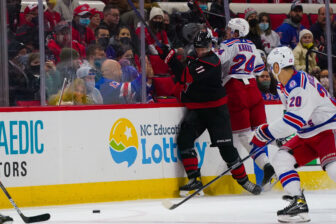