Where will former Rangers coach David Quinn land next season

New President and General Manager, Chris Drury didn’t really have much of a choice. Based on James Dolan’s comments that the dismissals of John Davidson and Jeff Gorton were performance related, how could he keep David Quinn on board?

The decision was made to relieve coach Quinn and his staff on May 12th. It’s been said the that he and Drury are still good friends, but these things are never easy. It’s been almost two weeks since he was let go and David Quinn, unlike JD and Gorton has not released a statement.

Almost to a man, every Blueshirt that spoke during their exit interviews made it clear that it’s all about the playoffs now. “Talk is cheap,” Chris Kreider said. He made it a point that everyone in the organization needs to do whatever they have to this summer to make it happen. “Our attitude starting right now has to be we’re making the playoffs next year.”

Now they will have a new man behind the bench to lead that charge.

What we did learn from the players that were made available was that Quinn as a teacher and groomer of young talent was a hit. “From day one they just harped on me being a complete player,” Team MVP Adam Fox said. “They knew I could defend. They helped me elevate my game.” The Blueshirts first overall pick, Alexis Lafrenière lauded his Quinn’s guidance and support this past season. “He helped me a lot,” the 19 year-old rookie explained.

Then the veterans came to the microphone and had similar praise but no real answers as to his future. “I really don’t know anything,” Ryan Strome replied when asked. However, the most important and telling person to speak on the Rangers’ bench boss was Mika Zibanejad. “I think over the last 3 years, in the beginning you’re trying to figure each other out,” he explained. “It’s been good, it’s been good with the whole coaching staff.” He also stressed this was a different kind of year with so much happening.

When asked if he would like to see Quinn back next season Mika dodged the question. Sometimes, it’s the answer the player doesn’t give that are the most telling. A non-response was basic foreshadowing of what was to come. 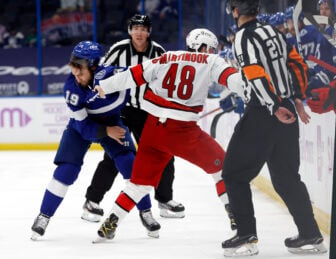 What went wrong for David Quinn

For his head coaching career, Quinn’s record stands at 96-87-25. That’s a career points percentage of .522 which is excellent when you consider for three years his roster was always in a state of flux and growing younger by season.

Ultimately, he was the victim of circumstance. The 54 year-old was brought in from the college ranks to groom kids and he did that well. He never had the roster pieces on the bottom six to play like the Islanders as he so often hinted at. The Rangers brass wanted to see what they had in a number of prospects and let’s face it, Kaapo Kakko is not going to play like Cal Clutterbuck on the third line. The onus was to win and develop kids even if it meant Julien Gauthier and Vitali Kravtsov had to do so on the 4th line. Not easy.

One industry source that understands the coaching game well explained that unlike a player making the transition from NCAA to the NHL, a coach almost has no support. The NHL isn’t a developmental league and that probably goes for coaches more than it does for players.

Where will David Quinn land next

So where will Quinn land next? There’s many teams that should consider him but at least three NHL teams standout. The Blue Jackets, Sabres, and Coyotes.

JD in his reintroduction presser said he felt Quinn was a candidate for the Blue Jackets job. Davidson praised his character and his work with the Blueshirts. He also said that Columbus wouldn’t be doing their due diligence if they didn’t consider all coaches.

The Sabres have not mentioned Quinn yet, as they have opted to speak with Bruce Boudreau and Rick Tocchet. However, that old college connection between him and Jack Eichel could come into play.

As for the Coyotes, Quinn would be a perfect fit for a club with veteran talent and some young kids. The low-pressure atmosphere in Arizona could bring out the best in him too.

Finally, I would not rule out a return to the NCAA. I’m pretty sure there are several schools that would consider bringing him back in some capacity.