Julien Gauthier should be nearing a return after being placed on IR January 15. Does this spell an end for Sammy Blais’ time with the New York Rangers?

A stint on the IR list requires a player to sit for a minimum of seven days, so Gauthier will be eligible to return for Monday’s contest against the Florida Panthers. According to Vince Mercogliano, Gauthier was a participant at Saturday’s open practice at Madison Square Garden held for fans to attend.

What will the Rangers do when the time comes for Gauthier to lace them up for regular-season action?

Oddly enough, it was Sammy Blais accidentally colliding with Julien Gauthier that sent the winger to IR after suffering an upper-body injury. The incident occurred in the Rangers dramatic 2-1 overtime win against the Dallas Stars on January 12.

The Rangers claimed 21 year-old center Jake Leschyshyn off waivers from the Vegas Golden Knights soon after. In two games with the team, he’s played as advertised by being a strong forechecker, who goes to the dirty areas of the ice. It’s unlikely that the Rangers will send him down to the Wolf Pack. Which means it will either be Jonny Brodzinski or Sammy Blais.

Which of these two would the Rangers be more willing to lose?

Considering how well Brodzinski’s played on the fourth line since his call up, I am leaning towards Blais. There’s also a slight cap benefit as well because waiving Blais’ allows the Rangers to bury $1.125M of his $1.525M hit in the AHL. Brodzinski would only be $762,500.

It should also be noted that the Rangers don’t have to do anything. New York can carry 23 players and have $1.2M in space that will accommodate Gauthier’s $800,000 cap hit.

However, accrued cap space for the March 3 NHL Trade Deadline is vital. So I doubt, GM Chris Drury will not make a move.

Is there a possibility for a trade? Of course there is, but it doesn’t seem likely at this time. No big deal is ready to be had unless someone is willing to give the Rangers a mid to late round pick for Blais. Although, rival GM’s are probably expecting Blais to hit the waiver wire.

Blais, 26, has 5 assists in 38 games this season. He’s yet to register a goal with the Rangers in 52 contests spanning two seasons.

Should the Rangers place him on waivers and lose him, they will have absolutely nothing to show for the Pavel Buchnevich trade. Makes you wonder, if that will play a factor in this decision. 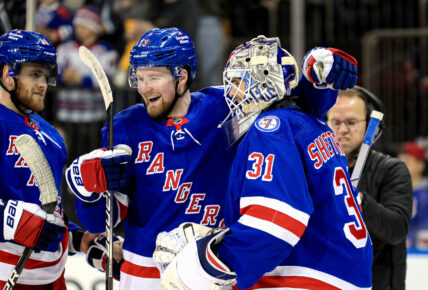 Also Read:
What if everyone left Alexis Lafreniere alone and let him develop?