The New York Rangers outstanding season will also put many of their star players up for some NHL Awards at the end of the year.

Back in January, we took a look at some players and their chances of winning the league’s top individual accomplishments hardware.

At the time, Igor Shesterkin was a co-leader to win the Vezina Trophy for best goaltender with Andrei Vasilevskiy. Meanwhile, Adam Fox was second to only Cale Makar for the Norris Trophy.

Let’s take a look and see how things stand now for some of the Rangers top performers.

A look at Vegas Insider’s site shows that Adam Fox has dropped significantly since January.

Fox is now fourth in the Norris Trophy race at a +2500 which is a way off the leader Cale Makar of Colorado coming in at a -250. Nashville’s Roman Josi is in second at a +250.

The Rangers defenseman has struggled at both ends of the ice since an injury forced him to miss the All-Star Game. Of course, struggled is a relative term when we are talking about Adam Fox.

Fox has registered 66 points in 67 games this season. But he was once atop or close to the leading scorer for defenseman at one point. Over the last few months, Josi has taken command in that department with 81 points in 66 games.

Meanwhile, Igor Shesterkin has distanced himself from the pack for the Vezina Trophy.

Per Vegas Insider, he’s the clear cut favorite at -400. Calgary’s Jacob Markstrom is his closest competitor at +600. In third is Carolina’s Frederik Andersen at +1200, and Tampa Bay’s Andrei Vasilveskiy has fallen to fourth at +3300.

It would take a decent fall off for Shesterkin, coupled with a hell of a run by Markstrom for him to overtake the Czar of New York.

Related: Igor Shesterkin is not very pleased with his game right now after a shaky start against the Flyers. Plus, Andrew Copp believes the comeback on Sunday will factor in the playoffs. Read More.

Chris Kreider is having an amazing season with 46 goals. Despite sitting third in the NHL in that department, he has to contend with Toronto’s Auston Matthews (51) and Leon Draisaitl (50).

Both of those players are the leading favorites to win the Maurice Rocket Richard title for most goals in a season. Matthews comes in at -140 and Draisaitl trails him at +160. Kreider, who has been incredible tips the scale at +1200.

Still, a big run by Kreider isn’t out of the question to make narrow the gap.

On the other hand, Gerard Gallant is coming on strong for Jack Adams consideration as coach of the year. While Darryl Sutter of the Calgary Flames is leading the pack at +200, Gallant is tied for second.

The Rangers first year head coach is a +300, which is even with perennial favorite Rod Brind’Amour in Carolina and interim bench boss Andrew Brunette in Florida. 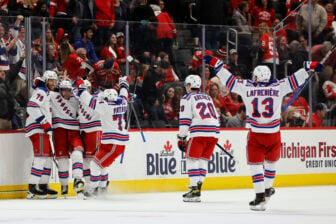