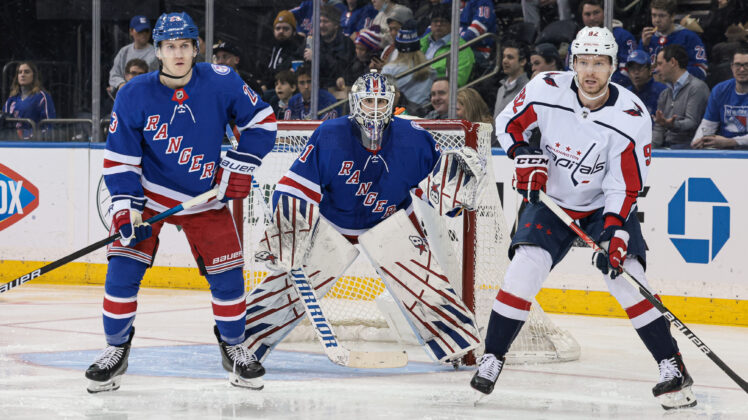 Igor Shesterkin made 36 saves but it was the late goal by Alex Ovechkin that spoiled his night. The ultra-competitive netminder said afterwards through a translator that he was “annoyed” giving that one up.

“It doesn’t matter if it’s a shutout or not. The most important thing is to finish strong, especially in the last five minutes of the game.”

The 26 year-old’s attitude to be perfect has not only helped him stay in the Vezina conversation for the league’s best goalie but he’s now being discussed for the Hart Trophy as NHL MVP.

“We played very well in front of me and had a great game on the penalty kill,” he said. “We really deserved that victory today.”

While Ovechkin’s late goal spoiled Shesterskin’s shutout bid, the Rangers goalie still delivered another another excellent performance. Arguably the favorite to win the Vezina Trophy, Shesterskin has a 25-5-3 record and .940 save percentage in 33 games this season.

“It was a good team effort with real good goaltending,” head coach Gerard Gallant said. “It’s a shame [Shesterkin] lost that shutout in the end.”

Alexis Lafrenière and Mika Zibanejad each had a goal and an assist as the New York Rangers collected a 4-1 win over the visiting Washington Capitals on Thursday.

“[Lafreniére] is getting better at it,” Gallant said about Alexis moving to right wing. “I think you saw after he scored the goal he lined up a left wing. He was probably excited– it happens sometimes.”

Barclay Goodrow and Chris Kreider also scored for the Rangers, with Kreider collecting his 34th goal of the season to remain near the NHL lead.

“It was good to see the Rooney line play really well,” Gallant added about his fourth line that also included Goodrow and Reaves. “They played against the Capitals top lines and do a good job. The three guys grasped the role they had to play and did real good.”

The Rangers are 5-0-1 in their last six games, a hot streak that has carried New York to second place in the Metropolitan Division.

At 12:57 of the first period, Lafreniere’s drop pass in the circle for Zibanejad resulted in a rifle of a slap shot and Zibanejad’s 20th goal of the season. The forward has now hit the 20-goal plateau seven times in his career, including each of the last five seasons.

“I tried to be an option for him, hoping that he sees me, and he did, obviously,” Zibanejad said. “He’s a really smart hockey player, sees the ice really well. I’m not surprised I got that pass from him.”

Lafreniére collected a goal of his own with 72 seconds remaining in the second period. A Capitals turnover in their own end sent the puck back to Ryan Lindgren, whose shot was tipped in front by Lafreniere for his 11th goal of the season.

“I’m playing better and better. I’ve always wanted to improve my game everyday,” Lafrenière said. “Playing every night on the right side is good for me and I’m getting better at it for sure.” 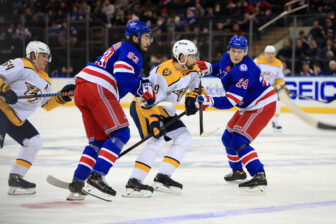