The New York Rangers will be taking on the Los Angeles Kings at the CRYPTO.COM Arena. The lineup should have Artemi Panarin back on the second line and the third defensive pairing is likely to be Patrik Nemeth with Jarred Tinordi.

One definite change will be the man behind the bench.

Knoblauch ready to coach the Rangers…again

Temporary head coach Kris Knoblauch spoke with the media and was asked about how things will work for tonight.

“It’s very similar (to last year), everything is in place,” Knoblauch said. “All the work that goes into a pre-scout is done many days or a week beforehand. I get the call yesterday and that’s already set. I talked to Gallant on the phone. We just talked about some line stuff. As for line combinations and power plays, they’re all set. I’m just trying to make sure they go running as smooth as possible.”

Knoblauch was hired as head coach of the Wolf Pack in 2019 and is in his third season with Hartford. As the team’s bench boss, his record is 60-38-9-7 and they are in good position to make the playoffs being third in the Atlantic Division.

However, even coaches all dream of getting to the NHL, even if it just temporary.

“It’s exciting,” he said. “Last year I didn’t know what to expect, but this year I do and I know the players a little bit better. Hopefully the team plays as well as they did last year.

Knoblauch filled in for David Quinn when the Rangers entire coaching staff was hit with COVID during the 2020-21 season. He coached six games and the team posted a record of 4-2-0. He won the first game against the Flyers by a score of 9-0 on March 17th, 2021, at Madison Square Garden.

“A big part of our success tonight came off O-zone face-offs,” Knoblauch said after that game. “I remember that was one of the things [Quinn] told me before the game was to give our top lines more opportunities to score. Have them take those offensive zone face-offs.”

Alexandar Georgiev is expected to get the start in goal.

Note: We will update this post with any confirmed lineup changes during warm-ups. 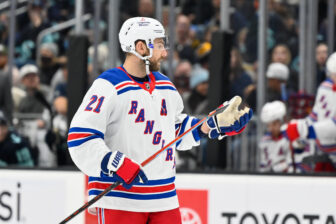 The New York Rangers have called up goaltender Tyler Wall and added him to the taxi squad.