The New York Rangers are going into next season with a lot of expectations after reaching the Eastern Conference Final.

Despite losing all their unrestricted free agents, the team signed Vincent Trocheck as an upgrade to their second-line center position. One potential storyline that could develop at the start of next season will be his chemistry with Artemi Panarin, for now it isn’t a big concern.

Here’s an updated look at some of the main storylines surrounding the team as we approach the 2022-23 campaign.

Jacob Trouba, 28, will wear the C on his chest for the upcoming season. The captaincy was last bestowed on Ryan McDonagh in 2018, which was left vacant after his trade to the Tampa Bay Lightning.

“I’m not going to change who I am,” Trouba said. “The reason all this happened was because I was myself and true to myself. I intend on being the same person.”

Now that the Rangers have a captain, the question arises if there will be any changes with the leadership group. Currently the A’s are Mika Zibanejad, Chris Kreider, Artemi Panarin, and Barclay Goodrow.

If the team keeps all four as alternate captains, they could designate two for home games and the other two for road contests. That was made popular by the Rangers in their 1994 Stanley Cup winning season.

Will Jimmy Vesey be on the bottom six?

According to Larry Brooks, in his latest Slap Shots column, he states the Rangers and Jimmy Vesey may be coming to terms soon.

Vesey is coming off a one-year deal with the Devils for $800,000 and is expected to sign for league minimum of $750,000. Should the Rangers complete the signing, he will be used as a potential 4th line winger. His entire cap hit can be buried in the AHL with the Wolf Pack.

If Vesey is signed, he likely poses a big threat to Dryden Hunt’s spot in the lineup as the 13th forward. Both play a similar style with Vesey having a little more experience and scoring ability.

Alexis Lafrenière has set a big goal for next season with the New York Rangers— to play in the top six.

The 20 year-old acknowledged that with both Chris Kreider and Artemi Panarin occupying the top two left wing slots that it won’t be easy. His best chance is to move to the right wing, which is something he’s open to doing.

There’s still a lot of roster shuffling left to do when training camp opens in September, but it’s very likely that Lafrenière will get a long look on the top line right wing. Worst case scenario, Artemi Panarin can bump up to the top line and shift Chris Kreider to the right wing to allow Laffy to play his natural position on the second line with Trocheck.

Can Vitali Kravtsov finally stick with the Rangers?

Vitali Kravtsov is in New York to get ahead on his training in preparation for camp. After a few tumultuous years, is he ready to make his mark with the Rangers?

A partner for Braden Schneider

The Rangers were able to unload Patrik Nemeth and his two years remaining at $2.5 million to the Arizona Coyotes at the cost of a second round pick. Now the team will be looking for a left defenseman to partner with Braden Schneider.

Zac Jones has been patiently biding his time to be a regular for the New York Rangers defense.

Another possible option is Matthew Robertson.

The 21 year-old left handed defenseman was selected by the Blueshirts in the second round of the 2019 Draft. At 6-4 and 201 lbs, he already has the size to play in the NHL but has taken a little more time to develop than some of the other prospects on the blue-line.

There’s also an outside chance that Nils Lundkvist, who normally plays the right side could make a switch to the left.

Lundkvist may be on the small side at 5-11 and 187 lbs, but makes an excellent outlet pass that’s coupled with an elite shot. The former first-round pick had 4 points in 25 games before being sent down to the Wolf Pack last season. 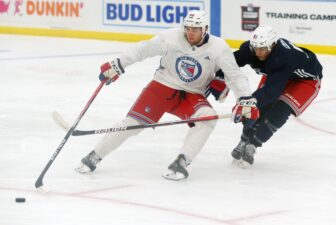