NHL Network is putting together their Top 50 NHL players list and Chris Kreider was the first member of the New York Rangers to make it at 43.

Kreider, 31, had an amazing 2021-2022 campaign for the Blueshirts scoring 52 goals (tied with Adam Graves second all-time) and 25 assists for 77 points in 81 games. Kreider also broke the team’s single-season record for the most power play goals (26) and game-winning goals (11).

Note: the Top 20 is yet to be announced.

Mika Zibanejad checks in at 29

When the Rangers sent fan favorite Derick Brassard and a 7th round pick to the Ottawa Senators in exchange for Mika and a second round pick in 2016 it had some fans upset. Their disappointment didn’t last long as the trade is widely believed to be one of the biggest heists in the salary cap era to date.

Zibanejad, 29, scored 81 points in 81 games last season for the Rangers and then added another 24 points in 20 playoff games. For his career in New York spanning six seasons, he’s registered 363 points in 404 regular-season contests.

“He’s kind of taken more responsibility, put it on his shoulder. He’s become a real leader of that team,” Daneyko said. “… He’s a dynamic player, he’s got a wicked one-timer when he sets up on the power play on the left side with that right-handed blast. … I just like his progression over the last three years.”

Mika is expected to lead the Rangers once again as their number one center. 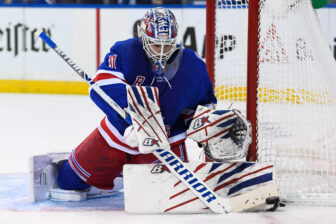 Artemi Panarin comes in at 21

Panarin, 30, signed a 7 year deal back in 2019 with the Rangers that included a full no-move close for the duration of the contract.

His first season on Broadway almost earned him MVP honors as he scored a career-high 32 goals and 95 points in just 69 games. Unfortunately, the season was cut short due the pandemic as Panarin was on a pace to score 112 points.

Panarin’s second season was also shortened because of the pandemic forcing the league to only play 56 games. The Breadman also suffered an injury and managed to suit up for only 42 of those contests, but still managed 58 points.

“Wizard with the puck. … He’s one of the more dynamic players in the League, he draws defenders to him,” Daneyko said. “The element of deception, he’s as good as anyone in the National Hockey League … It’s really hard to defend Artemi Panarin. He is a very special player offensively.”

Panarin is looking to be more involved in the offense this season, a scary notion for opposing defenses. 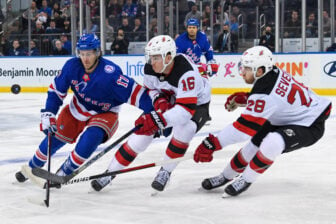 Also Read:
New York Rangers first preseason game a chance for some to ‘play their tails off’