The World Junior Championship are set to begin today with the New York Rangers boasting 7 prospects in the tournament. Back in December, the tournament was cancelled due to a flare up of COVID-19.

Edmonton will be hosting the event which runs through August 20th.

Team USA won Gold in 2021 and is hoping for a repeat performance. They begin their title defense with an opening match against Germany at 10 PM ET.

On Sunday, Team USA announced its roster which will see four players returning from the 2021 team that captured Gold.

“We had a great week of camp followed by a pair of good pre-tournament games to help us finalize our roster,” said John Vanbiesbrouck, general manager of the 2022 U.S. National Junior Team and also the assistant executive director of hockey operations for USA Hockey. “We had some spots to fill from December and we filled them in well. These are hard decisions, but we believe these are the 25 best players to achieve our goal.”

The Rangers selected Berard in the 5th round of the 2020 Draft. He registered 38 points in 36 games at Providence College last season. The Blueshirts have yet to sign him to an entry-level contract.

Team Canada announced their final roster for the World Junior Championship on August 1st. Brennan Othmann, along with Will Cuylle and Dylan Garand will all be major players for Canada’s Gold medal hopes.

Othmann, 19, scored 50 goals and 97 points in 66 games for the OHL’s Flint Firebirds this past season. He also added 9 goals and 24 points in 19 postseason games.

After the tournament, the first-round pick from 2021 will be joining the Rangers for training camp in September with one mission on his mind.

“The goal is to try and make the team the best that I can,” Othmann said.. “I know they’re a strong team with good young players and good leadership too. If I can make the team it’d be great for me and the organization.”

Canada’s first game will be against Latvia tomorrow at 6 PM ET.

The New York Rangers selected Adam Sykora in the second-round of the 2022 NHL Draft. They soon signed him to a three-year entry-level contract at the end of Development Camp this summer.

Rangers fans can watch their new prospect as Slovakia will start the tournament off by battling Czechia at 2 PM ET today.

Keep an eye on Kalle Väisänen and Jaroslav Chmelař

Also starting today is 2021 fifth-round pick forward Jaroslav Chmelař as he squares off against Sykora.

The now 19-year old Czech winger scored 18 points in 39 games for Joker’s U20 team. He will be moving to North America this summer to join the Providence Friars in the NCAA.

Following that 2020-21 season, Chmelař was watching the draft when the Rangers selected him.

“I was mostly watching to see if my teammates got picked. I was really happy when I saw my name on screen. I couldn’t believe it,” he said of the experience.

Right after he was picked by the New York Rangers, the then 18-year old received a phone call from a fellow Czechia player.

“Filip Chytil called me right after the draft to congratulate me. He told me to enjoy the moment because the hard work starts now.”

The Rangers drafted forward Kalle Väisänen in the fourth-round of the 2021 Draft. He picked up 5 points in 32 games for TPS in Finland’s top league Liiga.

“I can play both left wing and right wing,” the versatile Finn told us. “I adjust easily and don’t really see any challenges. Until 5 years ago, I played center as well so who knows.” 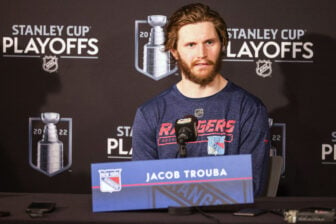