The New York Rangers and the Washington Capitals opened the season against each other way back in October. In that contest, the Caps came out on top but it’s the Blueshirts that have maintained a loftier position in the standings.

Igor Shesterkin will likely make his seventh consecutive start. He is 24-5-3 with a 2.01 goals-against average and a .939 save percentage this season, putting himself in the conversation for the Vezina Trophy.

Shesterkin’s brilliance has been a major reason why the Rangers have risen to third place in the Metropolitan Division. New York is one point behind Pittsburgh for second place and four points ahead of the fourth-place Capitals.

This strong goaltending has been particularly necessary during a minor slump for the offense. New York is 4-0-1 over its last five games despite only scoring 14 goals.

The Rangers unveiled some new line combinations during Tuesday’s practice, as coach Gerard Gallant felt the changes could bring “a little more balance” to the attack with forward Kaapo Kakko still sidelined with injury. The top line of Chris Kreider, Mika Zibanejad and Alexis Lafreniere is unchanged, but some personnel were shuffled among the other three lines.

“It might change tomorrow morning if we sit in the coaches room too long and look at our board. It’s a work in progress,” he said. “With Kaapo (Kakko) being out a little, you move things around and I wanted to make a change for tomorrow.”

New York has continued to benefit from an excellent power play, as the Rangers are 12-for-29 with the extra attacker over their last 10 games.

Rangers version of Identity Line back together

Barclay Goodrow moving off the second line reunites the “Swagger Line” as I called it back in November. When Goodrow, Reaves, and Rooney play together, they bring a high-level of energy and physicality to the Rangers forward group.

The unit’s best game together was a 4-1 win over the Islanders at UBS Arena, where Reaves had two assists and Rooney scored twice. It was a performance that had the head coach beaming about the trio.

“They were great, they did their job tonight obviously,” Gallant said after that game. “Reavo made some great plays, Rooney got a couple of goals, and Goodrow was great. Our 4th line was the difference for me tonight.”

According to Natural Stat Trick, as a line they’ve played 102:21 minutes together with 5 GF and 3 GA. 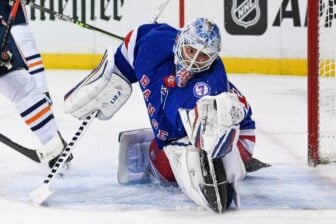 The Rangers and Capitals sit almost at the opposite ends of the NHL’s power-play standings, though Washington’s dormant power play may finally be sparking to life. The Capitals have scored with the man advantage in each of their last three games, matching their longest streak of the season.

“I think we have been a little bit better as of late, but there’s still a ways to go,” Capitals coach Peter Laviolette said. “We still have to get better. … When you get to the playoffs, special teams can dictate a game, and so that has to be on point heading into the playoffs.”

Special-teams play was a huge part of the first meeting between the Capitals and Rangers. Washington scored three power-play goals in a 5-1 win on Oct. 13 — the most power-play tallies recorded and conceded, respectively, by either team this season. 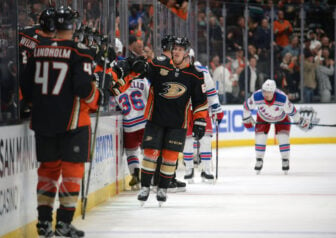 Capitals winning on the road

Winners of their last five road games, the Washington Capitals will look to continue the streak when they visit the New York Rangers on Thursday night in a battle of Metropolitan Division rivals.

A victory would tie the Capitals’ third-longest road winning streak in franchise history. Washington has 36 points and a 16-5-4 record in road games this season; only the Carolina Hurricanes and Pittsburgh Penguins have more points away from home.

However, this success on the road has coincided with an ugly stretch on home ice. The Capitals are 0-5-0 in their last five home games, which has kept Washington from pushing to challenge Carolina for the division lead.

The Capitals hope for more consistency as they return from a weeklong break in their schedule. The hiatus allowed for important recovery time for all of Washington’s players, particularly those nursing injuries.

T.J. Oshie, Vitek Vanecek and Justin Schultz have been absent with upper-body injuries, but the trio are questionable for Thursday’s lineup after returning to practice earlier this week.

With Vanecek’s status uncertain, goalie Ilya Samsonov likely will get another start. Samsonov’s play has been up and down this season, though he has a 3-1-0 record in his last four starts.