New York Rangers rookie camp starts Wednesday, who to keep an eye on

The New York Rangers rookie camp will begin on Wednesday (September 14) and it will culminate in two game set against the Philadelphia Flyers rookies.

Game 1 will be at 7:05 PM ET on Friday (September 16) followed by the finale on Saturday (September 17) starting at 5:05 PM ET. Both games will be played in Pennsylvania at PPL Center in Lehigh Valley.

Last year’s rookie games were streamed on YouTube, no official word on if these contests will televised or streamed.

Here’s a look at several key rookies that could make a serious push to make the Blueshirts’ opening night roster.

Brennan Othmann (2021 Rd 1, 16 overall): The 19 year-old scored 50 goals and 97 points in 66 games last season as the Firebirds’ captain. He just wrapped up their training camp and is getting ready to make a serious push to be on the Rangers opening night roster. While it’s possible he could win a starting job as one of the third-line wingers, his ineligibility to be sent to Hartford due to age requirements means it could be for a short stay before heading back to the OHL.

Will Cuylle (2020 Rd 2, 60 overall): He’s skilled, big, physical and slightly more mature at 20 years of age than some other prospects. This past season for the Windsor Spitfires, he notched 43 goals and 80 points in 59 games. Of all the forward prospects coming to camp, I feel he has a legit chance of stealing a spot on the bottom six.

Matthew Robertson (2019, Rd 2, 49 overall): He’s likely the organization’s most NHL ready prospect defenseman. At 6-4 and 201 lbs, he has the size to play with the big boys. Robertson posted 11 points in 65 games for the Hartford Wolf Pack and can still develop into a top 4 defender. He will be competing with Zac Jones and Libor Hajek to be Braden Schneider’s left defense partner.

Adam Edström (2019, Rd 6): The 21 year-old is big, very big. At 6-8′ and 225 pounds he’s a formidable figure on the ice. He’s the big grinding and hard-hitting type you want on a fourth line punishing opponents. At camp, he will be fighting exactly for one of those spots but IIHF rules indicate he must go back to the SHL if he does not win a roster spot for opening night.

Gustav Rydahl (Undrafted): The Rangers signed the 27 year-old as a free agent out of the SHL. He scored 30 points in 44 games last season and is eager to see if he can make in the NHL. He’s a big forward at 6-3, 201 lbs that can also play center and is considered a clutch performer. On the way to winning the SHL Championship, he potted 12 points in 19 games. Rydahl is also waivers exempt, so there’s a good chance we might see him this season even if he doesn’t make the team out of camp. 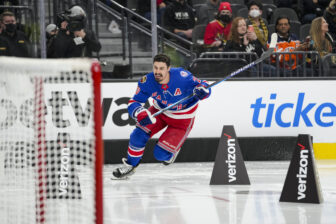