This included a valiant effort to come back from down 2-0 to defeat Ottawa 3-2 on Saturday with under six minutes to play. However, their return to the Garden on Monday night yielded poor results due to their stubbornness to play East to West hockey at all costs.

This juxtaposition is indicative of who the Rangers are and what they need to improve upon.

Gerard Gallant’s hire proving to be an excellent decision

As so often talked about, President and General Manager Chris Drury’s vision for the Rangers is for everyone to have a defined role and for the team to be tougher. Gerard Gallant seems to be making this happen. There is something to be said for a change in atmosphere around a team. In a recent press conference, Jacob Trouba spoke about the different feeling around the Rangers this season. Furthermore, there seems to be real understanding among the players about what their roles are.

The Rangers were often passive under David Quinn. There was no standing up for each other, not enough physicality, and not enough visible passion on the ice most nights. There were too many games where the Rangers just looked slow and disinterested. However, bringing in Gallant as well as Ryan Reaves , Barclay Goodrow, and Sammy Blais has had an immediate impact on physicality. The Rangers are clearly much tougher and are using physical play to improve their overall game.

One thing that was clear against Calgary is they still have work to do when it comes to sticking to their identity. Once Reaves was injured and taken out of the game, the Flames started to take control the physical tone of the match.

To better establish their identity, more players are going to have to step up in those moments. They need to make it clear that just because their main physical presence isn’t playing it doesn’t mean they can be taken advantage of. 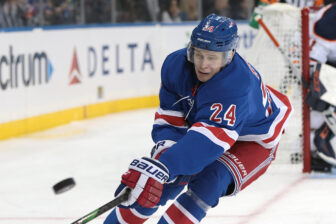 Pace and system showing improvement, but there is still work to do

The Rangers have been playing with better overall pace so far this season. There have been moments in the offensive zone where they put on the pressure and their opponent is struggling to keep up. But this is something they clearly struggled to attain against the Flames.

Calgary set a tone Monday night that the Rangers just couldn’t match it. They started to pick up the pace late in the second period, but it wasn’t enough. They never reached that next level that we’ve seen in other games.

The Rangers need to be starting games with a faster pace and be able to maintain momentum. Obviously they can’t be in the offensive zone all game, but when they do have zone time, they have to be more effective.

They’re doing a better job of moving in the offensive zone, but still passing too much. They need to shoot more and get more shots through, especially on the power play. Overall, pressure needs to be more effective and better sustained in the offensive zone. This should improve as the season goes on as this group needs more time to mature.

The first period against the Flames was total discombobulation. The Rangers have been too sloppy through several games thus far. Much of this has to do with “hope passing”.

Unfortunately, a main culprit of this plays has been Artemi Panarin. Based on his history and star status, Panarin will likely get back to typical form with a little bit of time. Ryan Strome’s return against Calgary already seemed to make a difference.

Additionally, the defense was sloppy and often out of position against Calgary, likely due to turnovers. This sloppiness is also a sign of adjusting to a new coach and a new system. The Rangers will get more comfortable as the season progresses. 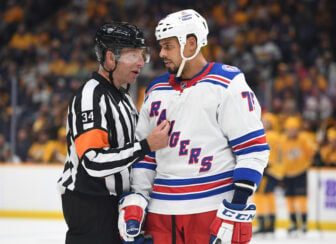 Igor Shesterkin is the Rangers’ number one goaltender. However this is only his second full NHL season, so he’s still working on perfecting his game.

Occasionally, he’s prone to leave some juicy rebounds, but it hasn’t stopped him from being almost the sole reason the Rangers have been able to stay in most games. By standing on his head, Shesterkin has already given fans flashbacks to Henrik Lundqvist. But they can’t rely on Shesterkin every game.

The power play has not been a strength for the Rangers so far this season. They currently rank 29th in the NHL with a power play percentage of 11.5%. They seem to be having trouble getting shots through on the power play.

A main reason for this is Panarin’s struggles. He’s currently getting less than 35% of his shots through this season. Both he and the Rangers would benefit from him scoring on the power play and five on five.

In addition, Mika Zibanejad has been hitting too many posts of late or breaking his stick on the man advantage. The Rangers need their stars to step up. Chris Kreider has been the best forward on the power play so far. He’s been playing his typical game positioning himself in front of the net, but they can’t just rely on Kreider.

Drury’s vision is coming together. There are still some inconsistencies and other issues that have to be addressed. But overall, the Rangers are showing significant improvement in several areas from last season. They are on their way to becoming a real playoff contender.