The NY Rangers have had a tough week, losing all three games so far against the Columbus Blue Jackets, Colorado Avalanche, and New York Islanders. However, there have also been some positive aspects of their play to note.

This weekend, they have an opportunity to end the skid and begin to return to the game that brought them success.

In the three games the Rangers have won so far, they scored three goals against the Tampa Bay Lightning, seven against the Minnesota Wild, and six against the Anaheim Ducks.

It did not appear that they would struggle to score similarly to patches last season. However, throughout this slump in which they have lost five of the last six games (1-3-2), scoring has become a problem that was highlighted on Wednesday night against the Islanders when they were shut out.

While the NY Rangers outshot the Islanders 41-29, many of those shots were not very threatening. They often seem to be looking for a pretty play instead of getting to the critical areas. For a team that has proven they have grit, sitting in second in the league in hits with 244, they seem to lack that element when it comes to getting to the net which is necessary for winning in the NHL.

You can read more about the New York Rangers shooting problems here.

The defense was notably tighter against the Avalanche and the Islanders in comparison with last week which is encouraging. As a whole, the Rangers were more diligent in the defensive zone and more responsible about not leaving opposing players wide open.

This aspect of their game is showing improvement, but now offensive struggles seem to be beginning. Patience will play a role this season as this Rangers team discovers their identity and works towards being a contender again. 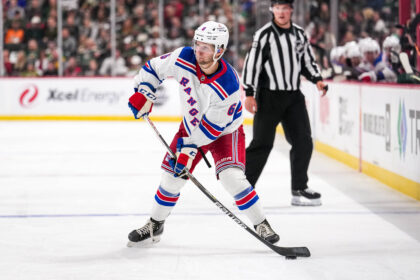 Multiple players stood out on Tuesday night against the Avalanche, and despite losing 3-2 in a shootout, the Rangers played a well fought game. Aside from his one mistake that led to Colorado’s second goal, Igor Shesterkin was consistent and impressive, stopping 42 of 44 shots through regulation and overtime.

Adam Fox also shone on both ends of the ice, effectively defending Nathan MacKinnon and forcing him off the puck to begin a quick and precise passing play with Jimmy Vesey and Barclay Goodrow which led to Fox scoring to tie the game. That was also Goodrow’s second point of the night. He scored the Rangers’ first goal of the game, making a smart read off of the fast-moving play.

Special teams have been struggling, and the Rangers were not able to score on any of four power plays and did give up a power play goal. However, they put on a penalty killing clinic in the second period, applying pressure and forcing Colorado out of the offensive zone.

In general, this was a solid effort against a tough team. The Rangers should be looking to build off these positives. 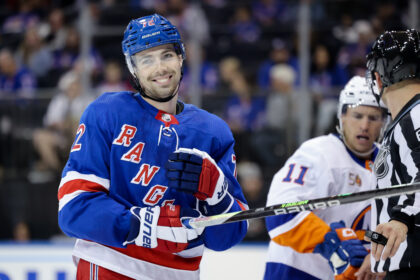 Back-to-back to get on track

After two days off, the NY Rangers get going again tomorrow in Dallas and Sunday in Arizona. Playing two days in a row gives them an opportunity to gain momentum. Attention will be on them to improve upon some of their early season concerns, but patience is important.

Note: All stats come from hockeyreference.com and nhl.com.