First let’s begin with how admirably Dryden Hunt has performed for the New York Rangers this season. He works hard, competes, and battles every time he’s out there.

Hunt should be wearing a hard-hat on the ice not a hockey helmet to exemplify his hard-nosed, blue-collar style. A game better suited on the 4th line rather than with Artemi Panarin and Ryan Strome, two of the Rangers most skilled forwards.

The Rangers have to be willing to make changes

Hunt, 26, is an undrafted player that signed with the Florida Panthers as a free agent in 2016. He showed some scoring ability in the minors but that has never translated to the NHL.

Tonight, he will play in his 29th game for the Blueshirts and will need just three more games to set a career high in games played for a season. This is his fifth year in the league.

He last scored a goal on December 1, against the struggling Flyers. Hunt has two assists, just one playing with Panarin and Strome in his last 7 games. The Rangers simply need more, and they have to make a change to their lineup.

The answer is simple really.

Move Filip Chytil to right wing where he’s actually produced. Move Barclay Goodrow up to third line center, especially since he’s being paid that kind of salary. Finally, move Hunt to the fourth line where his grinding style will complement Kevin Rooney and Ryan Reaves.

Chytil would probably work better with Chris Kreider and Mika Zibanejad, allowing Kaapo Kakko to go back to work with Panarin and Strome. Either way, it seems like the best path forward.

Filip Chytil at center is not working

Some may beg to differ, but Chytil for all his talent doesn’t seem like a great puck distributor. That’s a key facet to a center’s game. In 211 career games, he has only 41 assists to go with 37 goals. For his career on draws, he’s only won 39.8% of them. Which is another good reason to put him on back on the wing.

Last season, despite injury, Chytil had a promising campaign averaging .52 points per game. This year, playing exclusively as a center, he has just 7 points in 25 games for an average of .28 points per game. It almost screams to put him back on the wing and see what he can do before giving up an asset at the trade deadline to play in the top six for the remainder of this season.

Of course, there’s seems to be a stubbornness about moving him away from the middle in the organization. Chytil himself says he’s a center and that where he wants to play. That was echoed by Chris Drury and Gerard Gallant before the year began.

“He’s a guy that wants more ice time,” the coach said during the preseason. “He wants to be play center, we want him there.”

The fact is, the Rangers are having trouble scoring and have no depth on RW, especially after losing Sammy Blais for the season. With Barclay Goodrow able to play center, the Gallant and Drury need to do what’s best and give this move a shot.

Who knows, moving Goodrow in between Alexis Lafreniére and Julien Gauthier could spark them too. 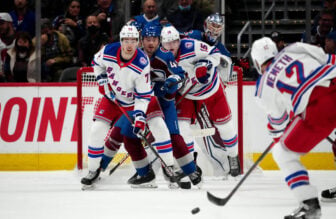 Also Read:
Rangers have no time to perseverate over losses, face lowly Coyotes