The NY Rangers rookie camp begins today at 12:00 PM with practice in preparation for a two-game set versus the Philadelphia Flyers rookies starting Friday.

We all know the big prospect names at camp like 2021 first round pick Brennan Othmann, Will Cuylle, Bobby Trivigno, Matthew Robertson, and Zac Jones. Those players are going to get a ton of attention as they have a chance to win jobs this season on the big club.

None of those players are centers.

The Rangers have done an incredible job rebuilding the roster and stockpiling top prospects over the years. However, the winners have all been either wingers, defensemen, or goalies. Matter of fact, Filip Chytil is probably the only notable young center to come up through the system and he was drafted in 2017, the year before the rebuild letter went out.

That’s why at this year’s rookie camp these players must step up and show the organization there’s promise down the middle.

According to the official New York Rangers rookie camp roster, six players are listed as centers.

Here’s how I rank them in the organization pipeline:

Of all the names listed above, Korczak has been a standout and signed his entry-level deal in May of 2022. This past season, he picked up 79 points in 68 games which was good for second on the Moose Jaw Warriors and 18th overall in the WHL. His 54 assists led the team.

While he may be considered small by NHL standards, he’s a solid playmaker that can shoot the puck well. At rookie camp, I would expect him to line up with Brennan Othmann on his wing to show what he can do.

“I try to model my game after Brayden Point, I think I have a lot in common with him stylistically,” Korczak said. “His determination to make it in the NHL is an example to others. I’m not saying I will be as good as him because he is a top-10 player in the league in my opinion, but he’s an example for kids like me.”

Since the Rangers drafted him this past summer, there’s been some healthy buzz regarding the self-described two-way center. McConnell-Barker comes in with decent size and should fill out over the next year. It would be nice to see him man the second line with a player like Will Cuylle on his flank. This is a real showcase for the kid and the Rangers are hopeful he has a future in New York.

“I’m a two-way centerman and I work really hard all over the ice,” McConnell-Barker said. “I am good defensively but I can produce offensively by putting the puck in the net and making some plays too.”

There was a lot of buzz around Henriksson when he was drafted despite his small size. The pivot from Sweden has been in the SHL going up against grizzly veterans for a few seasons and plays a strong two-way game. Unfortunately, the Rangers drafted him to be a playmaker that could provide offense which hasn’t really come to fruition. At this camp, it’s essential for him to give management a strong showing as at least a potential third liner.

A monster of a prospect, who plays it mean and with an edge. Last season, Rempe had a memorable fight against Flyers rookie Wade Allison that had everyone on the ice excited along with management up in the stands. Could he be a sleeper for the fourth line center position this year? Unlikely, but a good performance will have him in consideration in 2023-24.

The last two listed centers, Khoderenko and Grubbe are likely to get some playing time on the wings at rookie camp. Regardless, they need to be considered because they can play the position. The same goes for Adam Edstrom, who the Rangers note as a left wing for camp.

Khoderenko signed as a free agent out of college and played last year for the Wolf Pack. He’s got offensive upside to his game and could really use a good camp as the elder statesman of this group to stay in the mix.

Grubbe actually has a connection with Jimmy Vesey, who will be at regular camp on a PTO. The third-round pick the Rangers acquired from Buffalo for Vesey turned out to be Grubbe. When he was drafted, there was emphasis on his size and character as being hard to play against. He could have a future in the bottom six. 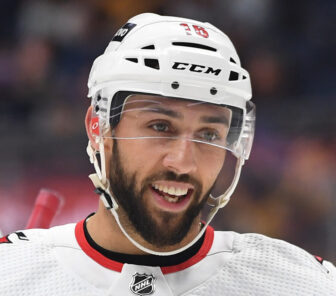