How to watch Rangers vs Islanders in final meeting of season

How to watch Rangers vs Islanders in the final meeting of this season. The Blueshirts are also fighting for first-place in the Metropolitan Division with the Carolina Hurricanes. Both teams are tied with five games remaining. Carolina plays the Winnipeg Jets at home tonight.

Alexandar Georgiev is expected to get the start.

How to watch Rangers vs Islanders (plus listening and streaming info)

Additional Listening Info: SiriusXM subscribers can listen to the game on Channel 223.

This will be the second game the Rangers have played at UBS Arena. They won their first ever trip in the Islanders new home on November 24 (4-1). The Blueshirts will also look to even the season series with a win tonight (2-1 Isles).

Artemi Panarin – 26 GP, 10G-17A-27 PTS – Panarin has eight multi-point games against the Islanders, including three three-point games and one five-point game on January 13, 2020. 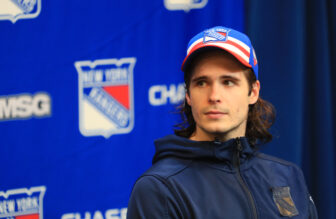 Also Read:
Igor Shesterkin has Vezina Trophy in his grasp with strong finish