New York Rangers announced that Alexis Lafreniere has cleared COVID protocol and will return to action tonight. In addition, Morgan Barron has been assigned to the taxi squad.

“We got a full lineup,” head coach Gerard Gallant said.

He also named Igor Shesterkin his starter for tonight’s game against the Toronto Maple Leafs.

Rangers get back Lafreniere; Shesterkin starts

Lafreniere, 20, has 11 points in 37 games this season. He’s missed the last two games against San Jose and Philadelphia due to COVID-19 protocol.

“He’s great,” Gallant said of Lafreniere. “He skated real hard and I got the call today that said he’s ready to go.”

Shesterkin, 26, is riding a hot-streak winning his last four starts which includes two shutouts. He’s also 2-1-0 lifetime against the Leafs with a .941 SV%, and 1.98 GAA.

The New York Rangers announced on Tuesday that forward Barclay Goodrow had cleared COVID protocol. In addition, Dryden Hunt has come off injured reserve after suffering an upper-body issue against the Golden Knights on January 6.

“They should be fine,” Gallant said of their availability for (Wednesday’s) against the Maple Leafs. “(Goodrow) is out of protocol. They both skated today, so I don’t see any issue with them.”

Rangers ready for a big test

The Rangers are returning home after going 3-2-0 on their season-high five-game trip despite being forced to shuffle their lineup due to various players landing in the NHL’s health and safety protocol.

New York ended the trip with an impressive third period showing in a 3-2 win over the Philadelphia Flyers on Saturday when Chris Kreider scored the tiebreaking goal with 6:30 left and nearly three minutes after Filip Chytil netted the tiebreaking goal. Mika Zibanejad also scored and has six of his 14 goals during New York’s 6-3-0 surge in the past nine games.

“We talked about it, and to come out of this trip over .500 would be real good,” Gallant said. “You always want to win every game you play, but there was a lot going on for our team — more so than any other time this year missing all the guys.” 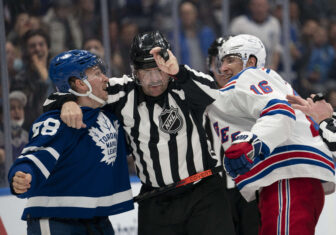 Also Read:
How to watch Rangers vs Maple Leafs; plus 4 postponed games rescheduled